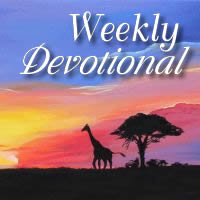 Now it happened, when David and his men came to Ziklag, on the third day, that the Amalekites had invaded the South and Ziklag, attacked Ziklag and burned it with fire, 2 and had taken captive the women and those who were there, from small to great; they did not kill anyone, but carried them away and went their way. 3 So David and his men came to the city, and there it was, burned with fire; and their wives, their sons, and their daughters had been taken captive. 4 Then David and the people who were with him lifted up their voices and wept, until they had no more power to weep. 5 And David’s two wives, Ahinoam the Jezreelitess, and Abigail the widow of Nabal the Carmelite, had been taken captive. 6 Now David was greatly distressed, for the people spoke of stoning him, because the soul of all the people was grieved, every man for his sons and his daughters. But David strengthened himself in the Lord his God. 7 Then David said to Abiathar the priest, Ahimelech’s son, “Please bring the ephod here to me.” And Abiathar brought the ephod to David. 8 So David inquired of the Lord, saying, “Shall I pursue this troop? Shall I overtake them?” And He answered him, “Pursue, for you shall surely overtake them and without fail recover all.”

In these verses of Scripture, we see David, a man who lost everything Not only did he lose everything, the men he led also lost everything. David was expectedly distressed, but on top of that there was talk of stoning him.